Tecno has released a brand new smartphone under the POP family – Tecno POP 3. The device comes a few weeks after we saw the Tecno POP 3 Plus. This new device is the direct sequel to the Tecno POP 2 and it comes with all the necessary upgrades.

In this article, we shall be reviewing the Tecno POP 3 specs and price. Without further ado, let’s get straight to it.

The design of the Tecno POP 3 is pretty much basic. It has a plastic body build with thick bezels at the top and bottom of the display. The phone measures 154.3 x 75.4 x 9.95 mm in dimensions. At the back is a single camera enclose in a module with LED flash placed at the top left. There is a fingerprint reader also at the back which is one of the two biometric security features of the device. The second one is the face unlock 2.0 system with “closed-eyes detection”.

The Tecno phone comes with a 5.7-inch Fullview display with pixels resolution of 480 x 960. This is considered bigger since the Tecno POP 2 has a 5.5-inch display.

Powering the Tecno smartphone is an unspecified chipset with Quad-Core processor clocked at 1.3GHz. The device runs on an outdated Android 8.1 Oreo with HiOS custom skin on top. The theme of the new Tecno POP 3 is “Bigger Memory, Broader World”, which is a bit of an exaggeration since the device comes with a 1GB RAM and 16GB RAM just like the Tecno POP 2.

The Tecno POP 3 features a single camera at the front and back. Both cameras come with a flash, which is cool. The rear camera features a 5MP sensor. At the top bezel is where you’ll find the 8MP front camera with Flash that features 7 levels of beauty mode. The company definitely focused more on the front camera in this device. Guess people take a lot of selfies these days than actual photos.

The device is equipped with a non-removable Li-Po 3500 mAh battery capacity. There is no word about fast charging support and am not surprised about that.

At the time of writing, there is no word on the price and availability of the Tecno POP 3 in Nigeria yet. More information is expected in the coming weeks. 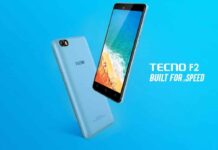